The Ria de Aveiro is a coastal lagoon shallow and extensive intertidal areas. It extends for 45 km along the west coast of Portugal from Ovar to Mira. The total area of ​​Ria that is covered during high tide varies between 83 km2 in spring tide and 66 km2 of neap tides. The average depth is about one meter and the maximum depth is kept artificially in the navigation channels, between 4 and 7 meters. Communication with the ocean is through the channel of Bar with 1.3 km long, 350 m wide and 20 m deep. 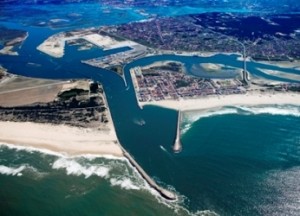 Can be divided into three main areas: the southern area includes the canals of Aveiro (Boco) and Mira, respectively with 7:14 km long and 200 and 300 meters at its widest point. The Channel S. Jacinto – Ovar in the north is 25 km long. In the far north this channel is very shallow resulting in a complex network of small canals and basins. The third zone, with a very complex geography, ends in front of the mouth of the river Antuã and is designated by Ria Murtosa.

Until about 10 centuries Ria did not exist, the rivers emptying directly into the ocean. At that time, began the development of two sandy languages, one to the north in Espinho and south near the Cabo Mondego. Over time the location of the bar was ranging from Torreira and Mira with periods in which the pond was completely isolated from the ocean. In 1808 was built the current bar, fixed by two piers.

The Vouga and Antuã rivers are the main sources of fresh water. The movement within the pond is dominated by the tide. On the west coast of Portugal the tidal wave propagates from south to north. The water penetrates into the Ria through the bar channel and the low speed propagates along the channels. The rate of spread is so low that in some places the phase state can be opposed to that which occurs in the ocean. Phase delays are higher in low tide reaching five hours, the ends of Mira channels and S. Jacinto – Ovar (Vicente, 1985). The maximum speed of 1 m / s order occur in the bar area, in the most narrow and deep channels.

Pulpit of Arouca,Calvary with Crosses and Little Souls of Arouca, 1643

The Dolmen of Cerqueira, in Sever de Vouga