The Monastery of Arouca is located in Arouca parish, town and municipality of the same name of the Porto Metropolitan Area and Northern Region, situated in the northeast of Aveiro, Portugal. 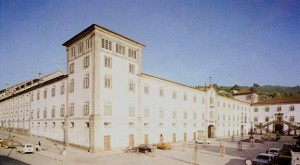 According to documentary sources, was founded in the first half of the tenth century, as a small monastery inhabited by a religious community under the invocation of St. Benedict of Nursia.

Couto received the letter in the twelfth century, a period that defined the character of this central monastery in the political and administrative life of the region. Since 1154 became inhabited only by religious.

Its importance reinvigorated with the patronage of Blessed Mafalda of Portugal, ephemeral Queen of Castile, who lived here between 1220 and 1256. Sancho I of Portugal and daughter Dulce of Aragon in 1215 was celebrated the marriage of his contract with Henry of Castile. Before the deceased, however, with 13 years Mafalda returned to Portugal without the marriage had finished, but with the title of queen. His father gave him the Arouca Monastery. Mafalda died on May 1, 1256, and is buried in Arouca.

Pulpit of Arouca,Calvary with Crosses and Little Souls of Arouca, 1643

The Dolmen of Cerqueira, in Sever de Vouga